Lithium batteries are a type of chemical batteries that rely on lithium ions to shuttle between positive and negative electrodes to achieve the purpose of charging and discharging. Due to their advantages of high energy density, high operating voltage, and long life, they have been widely used New energy vehicles, computers, and energy storage batteries.

CNT has the feature of high conductivity and aspect ratio, which contributes to form a conductive tube network structure. The impedance of carbon nanotubes with the amount added between one-sixth and half of traditional conductive agents is half that of the traditional agents. And its gross profit is almost equivalent to the separator, higher than the positive electrode, negative electrode, and electrolyte.

Get Your Custom Report Immediately


Although the current price of CNT per unit lithium battery is 1.8 to 3.5 times that of SP, we believe that its price will be attributed to the industry's normal price with the continuous update of carbon nanotube technology and the continuous expansion of scale. At that time, under the same conditions, CNT agents with higher performance are more and more popular.

The Penetration Rate of CNT Agents Is Improving, Which Is Expected to Change the Dependence of Domestic Traditional Conductive Agents on Imports. 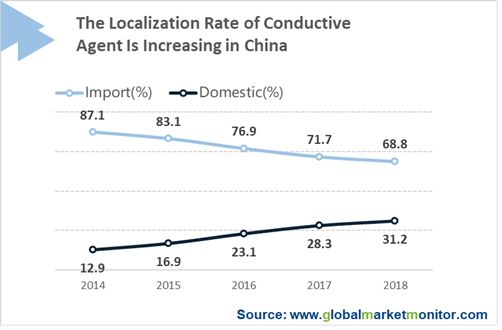 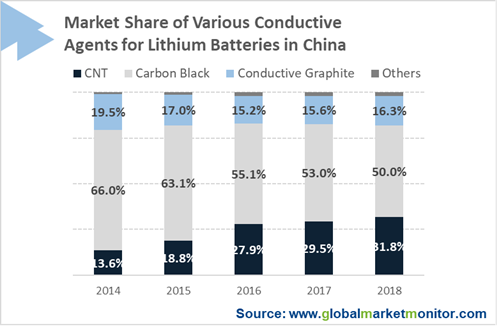 As a new material, CNT is currently mainly used as a new conductive agent in the field of lithium batteries. The lithium battery industry is booming with the rapid increase of new energy vehicles worldwide. 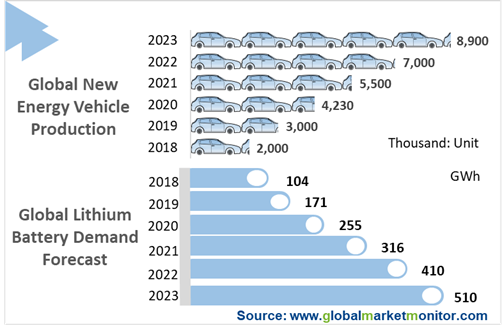 In the global market, the output value of CNT conductive paste for lithium batteries in 2018 increased by 21.2% year-on-year to 133 million USD. It is estimated that by 2023, the output value of the global CNT conductive paste market for lithium batteries will exceed 687 million USD, with a compound annual growth rate of 40.3% in the next five years. 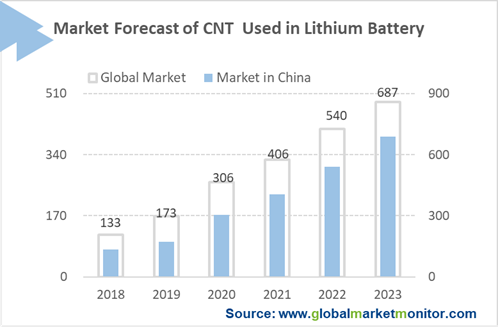