The drive motor system is one of the core systems of new energy vehicles, which determines the main performance indicators of the vehicle such as climbing ability, acceleration ability, and maximum vehicle speed, mainly composed of a motor and its controller. The motor is mainly assembled by stator, rotor, and casing, and connector, and other parts. Motors are generally required to have the functions of electric and power generation. Several types of motors such as DC, AC, permanent magnet brushless or switched reluctance can be selected according to the type. Among them, the DC motor has low efficiency, large mass, large volume, and poor reliability, which has gradually been no longer used by the new energy vehicles. A motor is a rotating electromagnetic machine that operates on the principle of electromagnetic induction and is used to convert electrical energy to mechanical energy.

From the perspective of industry support, new energy passenger car drives are based on permanent magnet synchronous motors and supplemented by AC induction motors.

The permanent magnet synchronous motor can still maintain high efficiency during repeated start and stop, acceleration and deceleration, and is the best choice for working conditions with limited high-speed road networks. In the sales structure of new energy vehicles in China, new energy passenger vehicles account for more than 90%. Therefore, due to factors such as drive efficiency and motor volume, most passenger vehicles currently use permanent magnet synchronous motors.

AC asynchronous motors are currently mostly used in passenger cars and commercial vehicles due to their low cost and simple structure.

However, the permanent magnet synchronous motor is impeccable, whose maximum torque is restricted by the demagnetization of the permanent magnet, with the poor anti-vibration ability, the limited speed, and the small power, and the high cost, as well as the difficulty to start.

Some foreign cars use AC induction motors, mainly represented by American car companies headed by Tesla and European companies, which is because of the scarcity of rare earth resources and the consideration of reducing motor costs. The disadvantages of AC induction motors are mainly the small speed range and low efficiency, and higher performance speed governors are required to match performance.

With the rapid development of the new energy vehicle market, the drive motor market has huge potential, attracting the entry of many companies and capital. On the whole, my country's drive motors have made great progress. The domestic drive motor technology is mature and the gap with foreign countries is small, but there is still a certain distance in peak speed, power density, and efficiency.

At present, domestic breakthroughs have been made in key common technologies such as high-performance magnetically conductive silicon steel, high-performance rare earth permanent magnet materials, and high-reliability automotive motor position and speed sensors, which has promoted the development of the rare earth permanent magnet synchronous motors at high speed, high torque, and high power in China. Besides, domestic products have been independently developed to meet the needs of various new energy vehicles, and some of the main performance indicators have reached the international advanced level of the same power level. 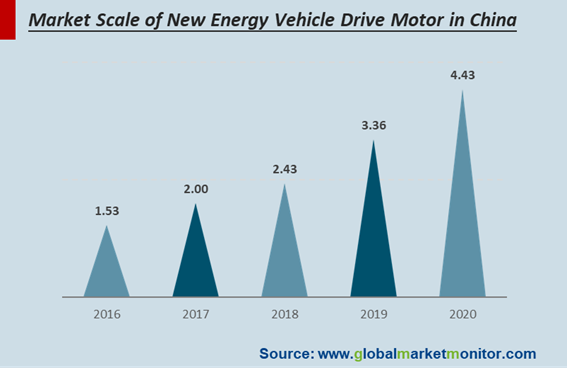 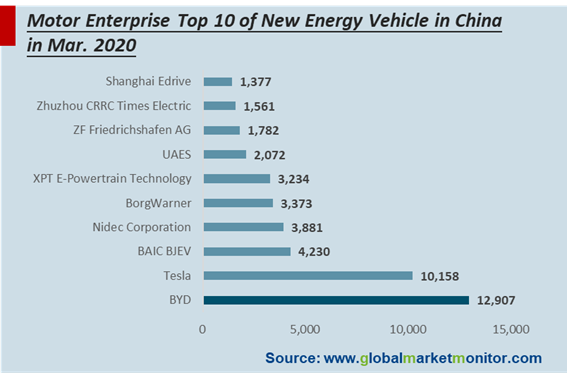 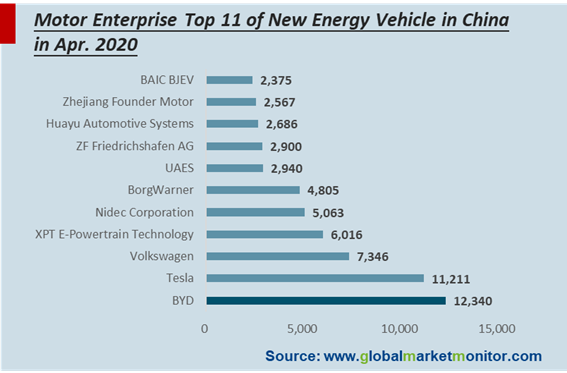 From the ranking point of view, the major changes were BAIC BJEV and Volkswagen. The former fell 43.9% from the previous month due to the sharp decline in production and the amount of motor matching. the matching account of electric motors of Volkswagen increased which added the production of Magotan GTE, Passat PHEV, and Tiguan LPHEV, and Tanyue GTE.

The number one motor supplier is still BYD, with a total of 12,340 units, of which 11,675 units are for passenger cars, accounting for 94.6%. The second-ranked Tesla motors all come from Model 3. According to the production data of the Ministry of Industry and Information Technology, a total of 11,211 domestically-produced Model 3s were produced in April, each equipped with one motor.

With the deepening of the large-scale process of the new energy automobile industry, the requirements for automobile power performance are becoming higher and higher, and the technical advantages of motor companies in the field of motor drive are gradually showing. The leading listed company in the industry chain realized a strong alliance through mergers and acquisitions of new energy motor companies, and squeezed the market through advanced technology. In the future, the share of such third-party suppliers will continue to increase.