The motor controller to control the driving motor of an electric vehicle is the control center of the power system of a new energy vehicle, which is also an important signal and energy transfer component for new energy vehicles. It can not only receive information from the vehicle controller and related components, but also process the information, and then provide accurate power to the drive motor based on the processing results.

IGBT Is One of the Core Components of Electric Vehicles

Enquire before purchasing this report:

IGBT undertakes the function of the conversion of direct and alternating current of the drive system and the voltage conversion, which determines the torque and maximum output power of the vehicle. The external charging is AC power, which needs to be converted into DC power through IGBT and then to the battery. At the same time, the 220V voltage must be converted to an appropriate voltage or higher to charge the battery pack. When the battery is discharged, the DC power is converted into the AC power required by the AC motor through the IGBT, and at the same time, it can control the frequency conversion of the AC motor.

Enquire before purchasing this report:

Only a few NEV enterprises can product IGBT chip around the world due to its high technology barriers. The dominance of the domestic automotive IGBT field has been dominated by foreign companies for a long period in the past. In particular, high-end high-power automotive semiconductors are still dominated by international companies such as Infineon, Mitsubishi, Fairchild, and Toshiba. More than 98% of IGBT chips were imported. Except for Japanese automakers, the automotive IGBT market is monopolized by Infineon, whose market share accounted for 70%. Among them, the IGBT used in domestic motor controllers comes from Infineon. 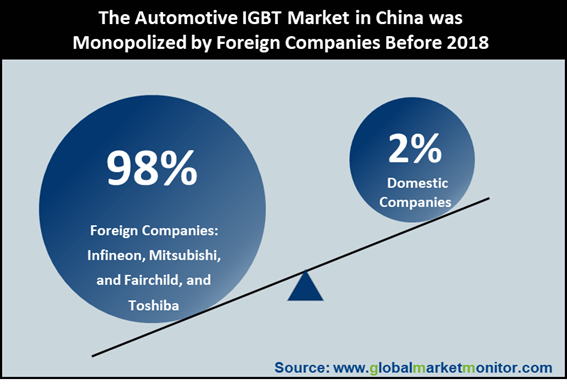 At present, the IGBT products of advanced countries in the world have developed to the 7.5 generation, and the next generation of IGBT Sic technology has also been fully popularized in Japan.

However, due to the late start of automotive IGBT modules and the constraints of core technology and raw materials from abroad, automotive IGBT technology in China is still at the third-generation level, which is more than 20 years away from international technology.

Who Overturned the Situation?

Benefiting from the strong support for the development of new infrastructure and new energy, as well as the independent and controllable target requirements for domestic semiconductors, the domestic semiconductor companies have begun to usher in a domestic replacement window period. As a leading domestic manufacturer of independent and controllable automotive-grade IGBTs, BYD used its R&D accumulation in the semiconductor field and large-scale application of new energy vehicles to break the monopoly of the IGBT market by international manufacturers. 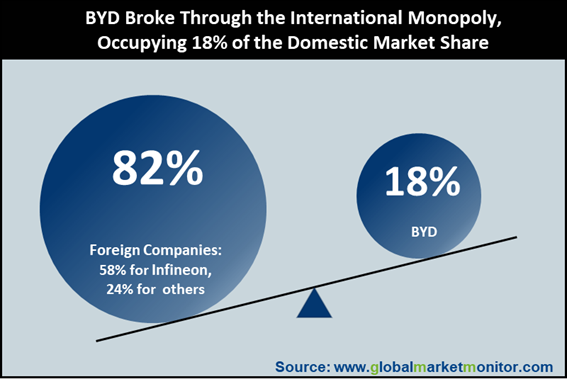 BYD has established an IGBT R&D team since 2005. In 2009, it launched its first automotive-grade IGBT1.0. In 2012, IGBT2.0 was successfully developed. In 2018, its IGBT4.0 products were characterized by current output, comprehensive loss, and temperature cycling. Key indicators such as life span surpass those of mainstream companies such as Infineon, with a production capacity of 50,000 pieces and realizing external supply. Besides, BYD continues to research on the third-generation semiconductor material SiC, which is expected to be fully autonomous and controllable.

IGBT is the core functional device of the new energy vehicle drive system and charging system. Related data shows that Tesla Model X uses 132 IGBT tubes (single tubes), all provided by Infineon. The price of each IGBT tube is about 4-5 dollars, totaling about 650 dollars. If you switch to IGBT modules, you need 12-16 modules, and the cost is about $1200-1600. Under the general trend of the rapid development of new energy vehicles, it is expected that the domestic market for new energy vehicles and charging piles will drive the demand for 20 billion IGBT modules. It is estimated that by 2025, the IGBT market for new energy passenger vehicles will reach 20 billion yuan. 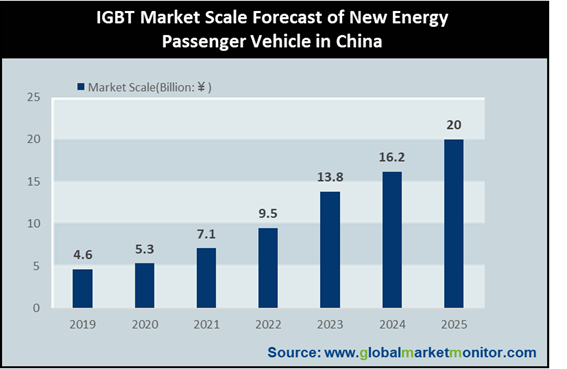 Among the traditional auto companies, BYD and CRRC have adopted self-research methods, while BAIC, SAIC, and others have adopted the cooperative approach of embracing semiconductor manufacturers to establish new companies.

Besides, Huawei has been in the automotive industry for many years, which has entered through two aspects of independent research and development and external investment. The former can be traced back to the development of vehicle modules in 2009. In 2013, Huawei launched the vehicle module ME909T. In January 2019, Huawei's 5G baseband chip Balong5000 was released, which is the world's first multi-mode chip that supports V2X probably used in the field of car networking and autonomous driving in the future.